Building with Minibrix was my second favourite hobby after Meccano but apparently I was given my first Minibrix set, a No.4 before my first Meccano Outfit, No.5 and with Accessory sets B & C, which made it up to the No.6 set, I was building No.6 models before I ever laid hands on a Meccano part! Minibrix was made of rubber and was like Lego with interlocking studs & sockets and for those who wish find out more about its history, I thoroughly recommend Malcolm Hanson's treatise published as Datafile No.l by Geoff Wright of MW Models, 4 Greys Road, Henley-on-Thames, Oxon, RG9 lRY, England.

Born in 1944, I suppose I was about 4 when I received my first set of Minibrix which would tie in with receiving Meccano from about 1951 onwards and I can still remember thumping the bricks together with my little fist as they were a tight fit. Even now, 'new' bricks still require appreciable force to assemble; although my original bricks have long since gone hard, the interlocking studs eroding to a drop-in fit but still useable provided they are not required to hang anywhere.

Even though from 1951 I was hooked on Meccano, I still built model after model in Minibrix up to about the age of 20; designing many new models within the limitations of what I had at the time. I had lost four Whole Bricks but had an excess of Lintels - I remember there were extra ones in the Accessory sets to those strictly necessary which can be explained by those sets being of the original 1935 series - later sets containing slightly reduced contents presumably to offset the inclusion of Corinthian Pillars, Balustrades and Universal Pins which were introduced about two years later. I also remember being given a No.l and No.2 Roof and extra Doors and Windows in little packets.

In my opinion, there were never enough Windows in the sets so I used all I had in my models. Even more surprisingly, only two Large Windows were added to make the top No.7 set but large quantities of Bricks so enabling only large, ill-lit models to be built! Consequently, I regarded the No.6 as the best balanced and have 'sixified' many of the best of my earlier designs which I am building to photograph in order to make a portfolio of my designs. (Three of them appear with this article). From my teenage years I started to record the designs I liked; my very first being a Coastguard Station which I include here, suitably 'sixified'. I was so enamoured of Minibrix that I occasionally dreamed of them and include my first dreamed house in this collection - not terribly inspired perhaps but a significant model nevertheless as I have never been able to build it until NOW - it had far too many doors and Windows! I must explain; since, as a child, I saw those mouth-watering Tudor (black & white) models in the back of the post-war manual I have lusted after acquiring some Tudor Minibrix but never managed to finance this desire until recent years - long after Minibrix ceased production.

Enquiries among Meccano enthusiasts, a few of whom were also Minibrix aficionados and adverts suitably placed, drew a complete blank. I had never even seen Tudor Minibrix until someone was placed next to me at Skegex '97 who also had with him a tiny 'shed' built with Tudor bricks - including the interlocking tiles (but no bracing Bricks). Malcolm Hanson was also avidly seeking more to add to his collection, so no luck there! 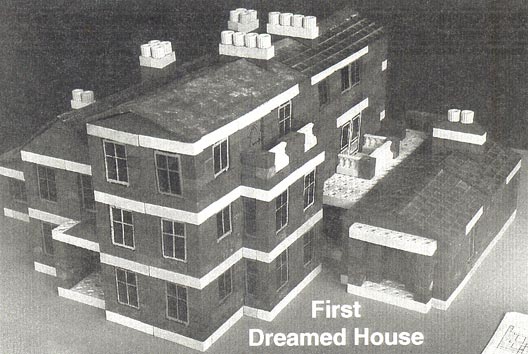 I was THAT desperate, as Meccano took up most of my hobby time but it would have been nice to acquire a useable best part of the largest T(udor) 3 set for, say, £100 maximum. When I mentioned this to Bayko enthusiast Robin Throp at Whitewebbs (NE London Meccano Club's Exhibition) in September 2001 he confirmed a forthcoming auction where there would be a lot of Minibrix INCLUDING TUDOR but thought I would stand little chance of getting what I wanted at my price level! However, I attended and succeeded in acquiring a load of models, both red and Tudor, in good condition (bricks, that is, the models were falling to pieces!) for an acceptable sum - with not only in excess of a T3 but enough red bricks to replace my entire hard collection! It was like all my birthday, and Christmas, presents coming at once except that I'd had to wait 50 years! I must further explain that I had acquired a certain quantity of red bricks in recent years - mostly hard - but never Tudor until this September so it was quite a collection I got at auction. Of course, this included a lot of Doors and Windows hence the previous reference to not having enough until now. For his trouble I promised to sell a Tudor model to Robin (especially as he had known the previous owner, Robin Lindsay) which he now has but this still left me with a T3 - there are a few minor shortages but I can still make all the T3 models.

After a period experimenting with Tudor Minibrix (it is more important to discover what cannot be built rather than what can) I tackled the one and only model I designed nearly 40 years ago using red and Tudor bricks combined. 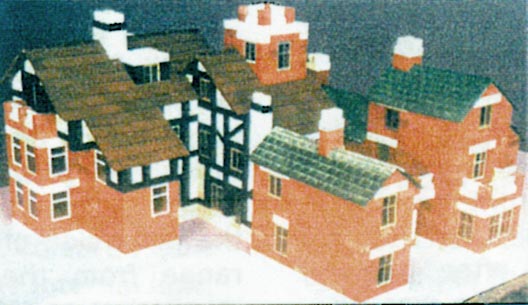 Although the company proposed mixtures from the outset, I have never seen them used together - even Malcolm Hanson has not done this to my knowledge - is my model a first? In addition, in recent years I have devised 'new' ways of using red bricks with rectangular 'solid' roofs to enrich my design scope and models illustrating these will be rebuilt and shown in a future article. Suffice to say that Meccano has taken a back seat lately and my fantasies are in rubber!

Next: Modelling in Minibrix (Part 1)