In my first article I outlined the background to my second favourite hobby, illustrating it with a few of my early designs - two of which I've only recently been able to build, having acquired a whole lot of Minibrix, including Tudor, at an auction in September 2001. I also mentioned I had acquired additional "red" Minibrix in recent years, including one or two extra Doors & Windows, which enabled me to design and build more elaborate models, with a few new ideas of my own, to extend the building possibilities of the "red" mainstream sets with their "solid" rectangular roofs, as opposed to the "separate tile" roofing system of the Tudor outfits. 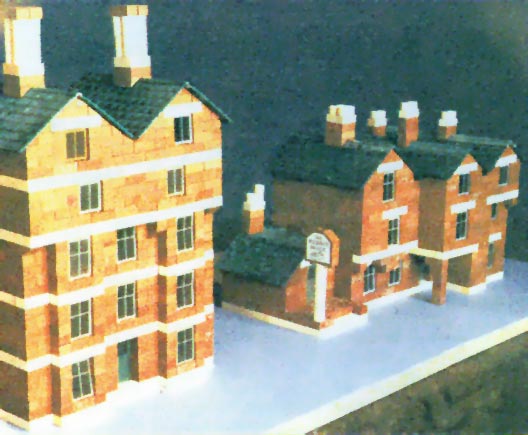 Unfortunately, walls at 45 degrees cannot be constructed with the system, but I found that Doors and Windows would fit nicely at this angle on plan; so several new models with splayed bay windows and street corner prominence were derived. I also tended to run out of whole Bricks, so I used stacked lintels decoratively to complete blank walls; thereby creating a new effect. Funnily enough, a similar effect can be seen on the large warehouse building at Battlesbridge in Essex! Using sticky tape: two or more roofs can be joined allowing me to fit mansard roofs - the roofs being separated afterwards with no ill effects. In any case, the thin gauge reinforced ridges tend to wear in time necessitating taped repairs; but initially I used masking tape, which unfortunately eventually attacks the rubber.

"Magic" mending tape does not stick so well, but is almost invisible and, as far as I know, does not attack the rubber. If roofs are installed between up stand end walls, slopes other than Angle or Double Angle Brick pitches can be used - especially steep pitches appropriate for churches or mansard roofs. Against the latter can be built a dummy dormer window, but quite realistic looking. "Real" dormers can be built between the ends of roofs otherwise connected at the rear by other roofs taped to the front roofs. All these ideas are combined in my City Pub giving a rich and varied roofline, so typical of such buildings, as well as a prominent street corner entrance.

With much used and older roofs tearing at the ridges, separating the two halves allows further possibilities such as the aisle roofs in my Cathedral. The Minibrix company themselves required Ridge Tiles to be torn apart to trim roofs against projecting chimneys - practically every such Tile was repaired in the collection I obtained at the auction; and of course the two halves of the "solid" roofs can be taped together again for future conventional use. 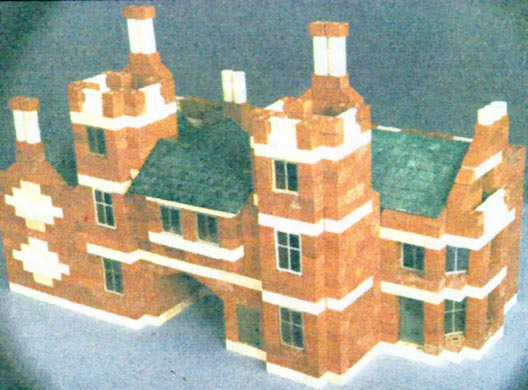 Another innovation was to represent "Tudor" - style chimneys using Corinthian Pillar "pots" topped by Half Bricks. Personally I find them quite convincing even though in reality the "pots" were of course, brick built (but I believe those at Tyntesfield, in North Somerset, appear "white") - but see what you think in my Mansion with Gatehouse and Classical Rear Facade. Another "wall filler" was devised by suspending a Balustrade upside-down over a 1" Lintel, thus saving three Whole Bricks and creating a pleasing decorative pattern in large areas of otherwise blank walls. This was used to good effect in my City Concert Hall (inspired, incidentally, on personal memories of Birmingham City Hall) - another great model for taped-together roofs!

Next: Modelling in Minibrix (Part 2)